The Awards of Excellence recognise and reward members who have made an outstanding contribution to the delivery and development of surf lifesaving activities in the NT each calendar year.

SLSNT considers the following Award categories each year. SLSNT aim to mirror the annual SLSA national Awards as closely as possible. Members recognised with an NT Award will be considered for nomination to the SLSA National Excellence Awards, held around October each year.

*Coach of the Year and Official of the Year do not require nominations to be submitted by the clubs. These recipients are selected by the panel from the supplied list of accredited coaches and officials.

Nominations for the 2020 Awards of Excellence close on Thursday 19 March.
To make nominations easier to submit, an online form has been developed.

Awards will be presented at a ceremony at the Adina Vibe Hotel at the Darwin Waterfront on Saturday 4 April, 2020.
6.00pm for a 6.30pm start, the ticket price includes a buffet dinner and drinks. 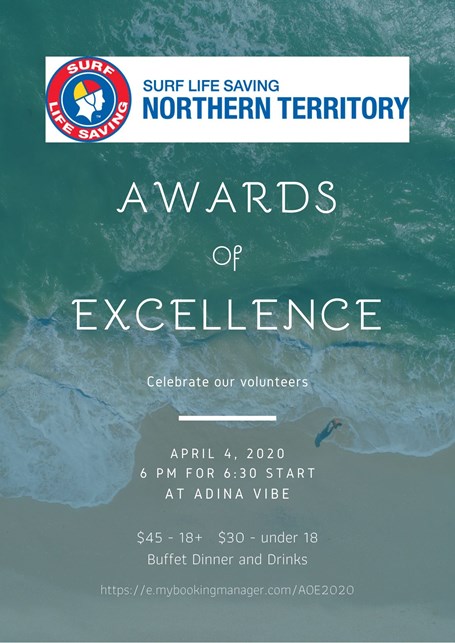