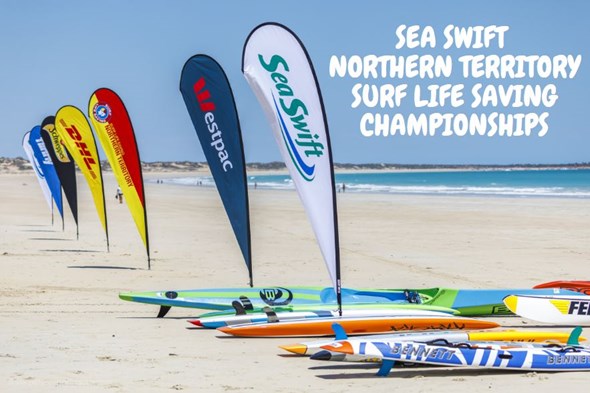 Each year the Champs are held at a different beach, rotating between the three NT clubs (Darwin, Mindil Beach and Gove Peninsula SLSC) and Broome SLSC, providing an opportunity for our members to showcase their skills and fitness in a fun and competitive environment.

Open to all members from u8 to Veterans (over 55). Entries are managed by your club - so get in touch with your club Director of Surf Sport or Director of Competition now.

Don't forget, bronze qualified members must have completed the required patrol hours to be eligible to compete.
The hours must be logged between the 1 August  to 31 July the following year.

Thank you to all of our sponsors for their continued support of this event and our surf lifesavers.

Due to Covid-19 the 2020 Championships at Mindil Beach were cancelled.

Hosted by Darwin SLSC at Casuarina Beach from Friday 7, Saturday 8 and Sunday 9 September 2018.

Hosted by Mindil Beach SLSC, in September 2016. It was great to see a team of 45 members from Gove Peninsula SLSC that made their way to the Champs.

The NT Surf Life Saving State Championships were hosted by Broome SLSC on the 26th & 27th September 2015 and were the highlight of our sporting calendar. Competition took place on Cable Beach and kicked off with the junior events on Saturday and finished with the senior events on Sunday. The championships saw 115 members from 5 clubs compete in 168 events over the two days.